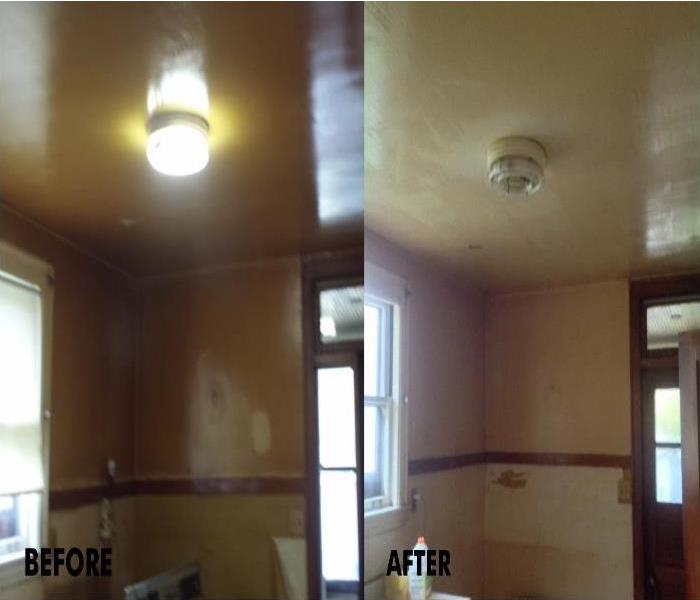 The entire first floor of this home had thick yellowish-brown, sticky residue throughout caused by years of heavy cigarette smoking.

SERVPRO® of Winnetka/Wilmette/Skokie professionals are often asked if they are able to remove cigarette or tobacco smoke odors.

The EPA says that Environmental Tobacco Smoke (ETS) is the mixture of smoke that comes from the burning end of a cigarette, pipe, or cigar, plus the smoke exhaled by the smoker.  It is a complex mixture of over 4,000 compounds, more than 40 of which are known to cause cancer in humans or animals, and many of which are strong irritants.  We normally refer to ETS as “secondhand smoke.”

The smoke from tobacco clouds the air and sticks to every surface of the area.  People can also see, smell, and feel a yellowish-brown, sticky substance that is on all surfaces and furniture in areas where smoking has taken place.  This extremely hard to remove residue discolors painted surfaces and plastics.  It can permanently change the appearance of wallpaper, blinds, paint, and many other items in the area.  The smoke can penetrate into furniture, carpets, walls, windows, and every other nook and cranny in the area.  In addition, the building’s HVAC system will carry the smoke odor and the residues throughout the structure.

The result of long-term smoking in enclosed areas is much the same as that of an actual fire.  Unfortunately, one difference is that the smoke from a fire is sometimes much easier to remove from walls or other surfaces than tobacco smoke.  Removing tobacco residue can be challenging.

Cleaning all surfaces will be necessary to remove contaminants and odors.  The cleaning process will always include deodorizing agents to help with that process.  Even after thorough and successful cleaning, it is usually necessary to seal surfaces with a sealant designed to lock in the very last of the stains and odors.  It is important to recognize that a normal “primer” is not sufficient, and a product designed to seal odors and smoke residue is required.

The “soft” items in a home such as upholstery, bedding, window coverings, clothes, etc. will need special attention.  Fabric absorbs odors very well.  They can be very difficult to restore successfully and may require outside specialists.

As with every property loss, SERVPRO® of Winnetka/Wilmette/Skokie will bring your property back to a preloss condition.